A girl who is as white as snow, with lips as red as blood, and with hair as black as ebony. They named her ‘Snow White’,

Snow  White is Disney’s adaptation from the German fairytale by the Brothers Grimm.  Snow White is a princess that is living with her cruel and wicked stepmother after the death of both of her parents.   Her stepmother, the evil queen, is so jealous of Snow White’s beauty that she ordered one of her huntsman to kill  her in the forbidden forest.  The huntsman pitied Snow White; so he just left her there hoping that she will not survive the night.   There, she found a cottage and surprisingly met 7  dwarfs.

Our very first princess in this series.  My inspiration for this shoot came from the Snow White movie with Julia Roberts and Lilly Collins.  I wanted her to be simple, innocent and young.  We decided to use Brie Doffing as our Snow White.  Its so happens that she has worked with Disney as one of the princesses in the Disneyland in Japan.  Brie is a model/actress and one of the sweetest people you can ever meet.

For this shoot we worked with one of the best make up artists in LA, Albert Elizondo.  He is amazing and really captured what we had in mind for Snow White.

“lips as red as blood”

I couldn’t help but use this blue bird in our shoot.  Snow White was known to be friendly with all the creatures in the forest. 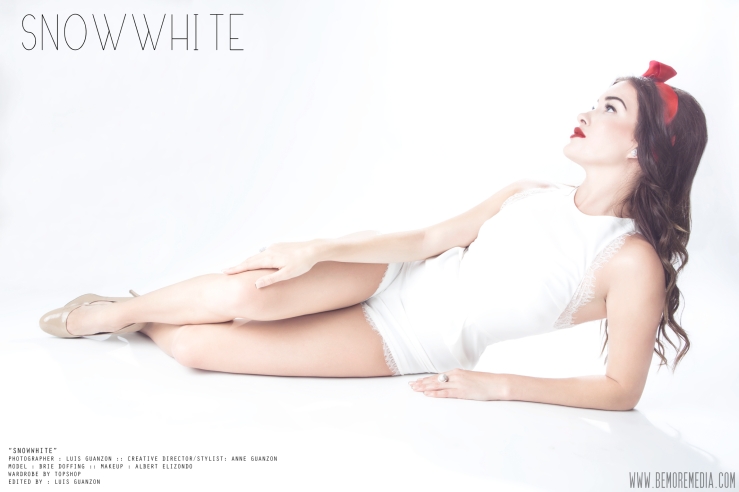 For her outfit I used this white romper lined with lace. I wanted to use the red bow from the animation version, so I went to Michaels and purchased gift wrap ribbon. 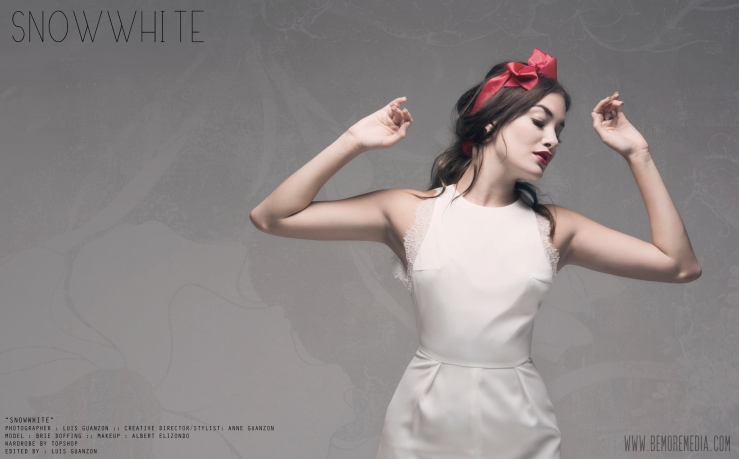 My husband and I love doing spec ads.  He made this into a Topshop Ad since we really got this outfit from there.

Snow White swapped her red apple for a red Chanel.

Our princess series will have a young, fresh and sweet feel compared to our villains. We wanted to bring out the drastic differences between them.  I would like to thank Brie, Albert, and Justin for helping us bring this to life.  We hope you will love our princesses as much as the villains.